This may be a long newsletter this week so you may want to get a cup of tea before you sit down to read it…..

We had a great run out at Bosbury last Tuesday – a bit on the warm side but great to run in a different location.  Thanks to Rachel and David Bannister for showing their groups, their local runs.  I think we will be back there next year for another pub run.

It’s good to see the Harriers being represented at races over the past few weeks.  Here are some of the stories:-

Worcester 10K and Half Marathon.

Martin Williams entered the 10K on a whim…

“Left Ledbury early about 730 due to road closures in Worcester and not sure where to park. Arrived about 8.15, grabbed a hot drink and walked to the race village.  There was definitely a buzz around the race village. It was very busy as there was a half marathon on as well. Saw a few other Harriers who were doing various distances

Dropped my bag in The Hive and set about a warmup. Arrived back to the start about 9 30 which was now rammed with all levels of athletes and got in the area for my estimated pace

Off we went after what seemed like ages waiting at the start. “Must not go off too fast out”.. over Worcester bridge a little loop then back into town. loads of supporters out cheering and shouting on a day that was getting warmer as we progressed

Through the back streeets of Worcester where the watch kept losing signal. “Am I going too slow?” Then out along the canal (not much support along here), over the Diglis bridge –  starting to struggle now. Couldn’t up the pace down along the otherside of the water

Back into town for a quick finish in a time of 41.15 position 50.  Was hoping for a bit quicker but there was a lot of twists and turns which seemed to slow me up.  A good event, well organised with a Fab t shirt and medal.”

Mark Lister had decided on the Half as his choice of event.

“I have done this event every year since it started in 2014, the 10k for the first three years and this was my fourth half marathon, and it was by far the hardest. Even with a 9.00 o’ clock start it was extremely warm and was only going to get warmer. I had a cunning plan to go under two hours. It involved doing 8:40 miles for the first six, because that part of the course is flat, and then 9:10 miles for the rest.

I saw Laura, Tor and Martin before the start as they were doing the 10K.

It started off well and I went through half way in 56:48, well ahead of schedule. Then it all went pear shaped. There are more hills on the second half of the course and there was virtually no shade. Despite taking on as many fluids as I could both before and during the race it was obvious very quickly that the conditions meant I could not maintain any sort of pace and I was getting quite badly dehydrated. My confidence was not helped when a woman in her 20’s collapsed in the road in front of me at about 9 miles. Fortunately there was a first aider on a bike who arrived within a few seconds. By now I was just concentrating on finishing and despite seeing another lad in his 20’s being treated for exhaustion a bit further on I plodded to the finish in 2:04:54.”

This is the “before” picture.  Mark has said that it was a good job he wasn’t around for the “after” photo!!

The previous day – 4th September, Rachel and David Bannister had taken on the Cotswold Classic – 10 mile race but things hadn’t started out as planned…

“The Cotswold Classic is a 10 mile undulating road race around the country lanes near Witney, Oxfordshire. A super well organised event with the added bonus of a long sleeved technical t-shirt at the finish, a different colour every year. For us, it was also a chance to catch up with familiar faces on some of our old running stomping ground. Despite best intentions of an early start, we almost didn’t make it as we missed our alarm and didn’t wake up until well after when we should have been in the car and on our way. But with David throwing me out as we passed registration to grab the numbers while he dumped the car, we managed to get to the start line with a whopping 3 minutes to spare. With 100 marshals on the course, and locals cheering on outside their houses, the support was fantastic. The ‘highlight’ of the race is Hillzakilla which is a short, steep incline followed by a very long drag … one of those hills that just keeps on giving. No cuppa, no breakfast and no warm up is obviously the way forward as David finished 9th overall, and I bagged myself a course PB. With free beer at the finish (for anyone who could stomach a post race beer at that time of the morning) and cakes (for anyone who didn’t run out their house forgetting to take some cash), this race is definitely worth a go next year if you fancy a road trip.” 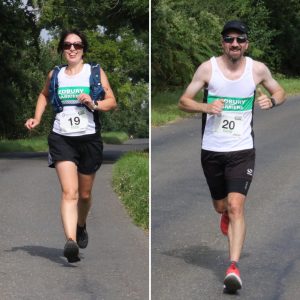 Tor and Laura have been out again this weekend at the Wye Valley Tunnel Run. Hopefully a bit cooler than last week!

Keep those race reports and photos coming.  It’s good to see what everyone is up to!

We are back at the Rugby Club this week.  Please do sign up on the sheet.  It does help the Lead Runners to know who is coming.

We are now getting into that time of year when the nights are drawing in so please dig out your Hi-Vis vests and head torches.

“Thank you” to all of our current Lead Runners – we couldn’t do it without you.  If anyone else would like to become a Lead Runner, please let me know or talk to your Lead Runner next time you are out. The more we have, the less often you will need to take a group.

We do help and encourage our Lead Runners to do the Leadership in Running Fitness qualification run by England Athletic.  At the moment, it is an on-line course.  Have a chat to Jayne or Sally Rooke to find out how the on-line course works and how they found it.  I am waiting to see when the in-person ones become available again and I’ll let you know when this happens.

If you are doing the London Marathon (either in London or Virtually), please could you come to the club on 21st September at 6:15 in either your club vest or your charity vest so we can take a photo for some publicity.  Thanks.

If you want a Ledbury Harriers vest, please see Neil Grinnell on a Tuesday night and he will sort one out for you.  If you want a training top/hoodie or other club branded goods, please follow this link on the website.

These will start again on Thursday 23rd September.  They are open to everyone and all of you are welcome to come.  Please meet at the corner of Prince Rupert Road and New Mills Road at 6:15 for a warm-up or 6:30 if ready warmed up.  They will be a mixture of sessions designed to increase your speed, endurance and also to teach techniques on how to deal with hills.  Let’s face it – if you run round Ledbury, there are always hills! The focus for these sessions will be the Newent Nine towards the end of November.

They’re back and they won’t cost you a penny to take part!!  These are monthly cross-country races which will take you to all parts of Herefordshire.  This year, the men’s and women’s distances willbe the same at around 5-6  miles.  There is a team event for which we need 4 members per team (one Male and one Female team).  The two dates that have been finalised are:-

Usually, people meet at the Rugby Club  to share lifts to get there.  If you want to take part, please see Neil Grinnell or drop him an email at neilgrinnell@yahoo.co.uk

If you are unsure about doing cross-country but would like to have some sessions on a Sunday morning to learn the techniques or to gain some confidence in running off road, please let me know and we will try to get some organised.

There is also a Summer League planned  – details of that will be forthcoming next year.

16th October – we are taking over the Volunteer spots for the parkrun at Newent.  I will be taking names over the next couple of weeks on a Tuesday night or you can email me and let me know that you want to take part.  If you haven’t done a parkrun before, then this is a good chance to see how they work.  We would also like to get some pacers out on the course for that Saturday  so if you think you could run the course at a certain pace, then please let me know as well.

26th September – we are planning some parkrun tourism with a trip over to Ross parkrun. It would be great to get as many of you there as possible in your Harrier shirts. We can grab a coffee and bacon roll afterwards.  A good chance to meet people who aren’t in your usual running groups.

Dates for your Diary

Be quick as entries are almost sold out for this one!

I think that is it!  Well done for getting this far!

Have a good week